Favorite Quotations:
“I changed by not changing at all” - Eddie Vedder
“Don’t look for hand outs, just opportunities” - Ignite

Favorite T.V shows: The Wonder Years, Entourage, Curb Your Enthusiasm, Its Always Sunny in Philadelphia, Kenny Powers of Eastbound & Down


Vic Fuentes is the lead singer and guitarist of post-hardcore band Pierce the Veil from San Diego, CA. He has also played some keyboards on Pierce the Veil's records. He plays in the band along with his brother Mike Fuentes. Both Fuentes brothers attended Mission Bay High School.

In 2012, he helped release Pierce the Veil's most commercially successful album, Collide with the Sky, which ranked #1 on U.S. Rock and Alternative charts.

In 2012, he helped release Pierce the Veil's most commercially successful album, Collide with the Sky, which ranked #1 on U.S. Rock and Alternative charts. He has one brother, Mike Fuentes, who co-founded Pierce the Veil with him. In 2014, he is dating a woman named Danielle Victoria.

He covered Gotye's song, "Somebody That I Used to Know," for the 2012 release of Punk Goes Pop 5 with Mayday Parade. And "Just The Way You Are" by Bruno Mars. Go find it on youtube.

Aside from being the lead singer of Pierce the Veil, Vic Fuentes is also the group's primary songwriter. Singing his own lyrics helps him connect with the song and deliver a passionate performance.
Vic Fuentes started writing music by accident. He wrote his first song with friends at a party, and instantly knew it was something he wanted to keep doing. The feeling of making something real, he explained, was almost like a sort of drug.

Music:
with Pierce The Veil 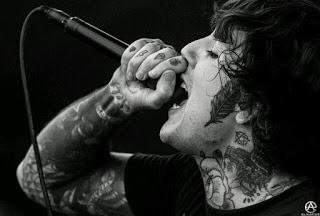